Posted on December 1, 2013 by Wasps destroyed

Farmers in Scotland will keep spraying crops with a toxic pesticide blamed for harming bees despite a European ban coming into force today. 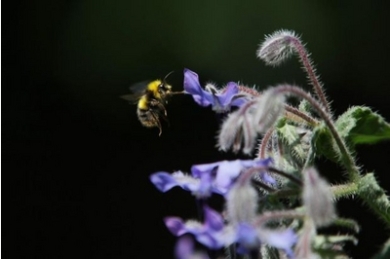 The European Union has banned the use of three neonicotinoids from today, but has omitted thiacloprid from the list. Though its manufacturer, German chemical giant Bayer, insists it is safe, environmentalists point to scientific studies showing it makes honey bees more vulnerable to disease.

In 2012, thiacloprid was sprayed on 11,488 hectares of potatoes and 1134 hectares of winter oil seed rape in Scotland. According to the Scottish Government, its use is now “likely to increase”.

The prospect alarms environmental groups, who are calling for the chemical to be banned. The “loophole” that exempts it from the European restrictions should be closed, they say.

Dr Maggie Keegan, head of policy at green charity the Scottish Wildlife Trust, said: “Research has shown that this neurotoxin has sub-lethal effects on honey bees by increasing their susceptibility to pathogen attack, which decreases the chances of survival of juveniles.

“As there is increasing evidence to show that thiacloprid is harmful to non-target species such as honey bees and freshwater insects, the Scottish Wildlife Trust believes it is right to be precautionary and this chemical should be banned.”

He said when thiacloprid was used in combination with fungicides, as it often is, studies suggested that its toxicity could increase by up to a thousand times. He said: “It should be suspended until it has been shown to be safe.”

Shardlow said the European Food Safety Authority had not yet assessed the safety of thiacloprid, though it had been asked to by the European Commission. It was the authority’s assessment of other neonicotinoids that led to the two-year ban, starting today.

A coalition of 13 environmental groups are calling on the UK and Scottish governments to “fully enforce” the ban. The UK Government has fiercely opposed the ban; the Scottish Government has previously suggested it should be agreed but not implemented.

The National Farmers’ Union in Scotland (NFUS) told the Sunday Herald it did not agree with the European ban. It claimed the rate of decline of bumblebees had slowed since neonicotinoids were introduced in the UK in the early 1990s.

An NFUS spokesman said: “If the European Commission is taking away all of the chemicals we use to fight off disease on our crops, then what are we going to be left with? This new ban may end up forcing farmers to use chemicals that could do more harm to the bee population.”

He added that beekeepers were also concerned the ban may have a negative impact on bees, as farmers could end up spraying more pesticides. “Pollination from bees is crucial to farming and we need to make sure the science behind the ban is justified,” he said.

The Scottish Government ­promised the European ban would be implemented in Scotland, along with the rest of the UK. However, it pointed out that oil seed rape crops grown from seeds treated with neonicotinoids can still be harvested next summer.

A Scottish Government spokesman said: “The use of thiacloprid is likely to increase over time but not necessarily in response to the restrictions on the three neonicotinoids. It is standard practice to vary the treatments used, as increased resistance can become a problem.”

Dr Julian Little, a spokesman for Bayer, said thiacloprid was intrinsically of low toxicity to bees, and is mostly used to control pollen beetle.

He said: “It is perhaps the safest insecticide in a farmer’s armoury, being so safe to honey bees that it can be used on open flowering crops.

“If you call for a ban on this product, you would have to withdraw pretty much any other insecticide being used in Scotland first.”