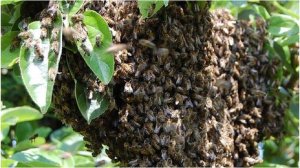 An important story, and a nice one to read. Please take it to heart.

A Conservation Story In My Front Yard

I travel far to write and photograph endangered species stories for children’s books and articles: wild dogs in Africa, Thai elephants, orangutans, nesting sea turtles. Yesterday a story about one of the most important disappearing-species came right to my front yard.

“No,” I said, wandering outside. From behind my screen door they just looked like some innocuous fliers. My gaze fell on a swollen tree branch. I thought it was burl or gall but this lump writhed. Bees. I was pretty sure they were honey bees. Although I advocate for wildlife, I felt panicky. Two girls were attacked by bees in my yard once; and my dog was one week out from major surgery. My mind flew to the quickest way to rid my yard of the swarm – Orkin – but I knew it was wrong and also now illegal to kill honeybees. I called my husband to take a look and he murmured, “Hmmm, I saw a sign down the road that said, ‘honey bee swarms wanted’.” I drove to the sign, called the number and began entreating the man on the other end of the line, Joe Hurley, to come right away. He said he’d cancel his planned meeting and would be at my house in ten minutes.

Joe Hurley, owner of owner of Kettle Ridge Farm on Benson Road in Victor, showed up with smoker, plastic bin and saw. He donned netted hat and gloves. He lit a smoker and stoked it with sweet smelling grass. He eyed the swarm. “A couple thousand. Relatively small hive,” Joe said. A large hive can house 10,000 bees or more. He said my small crabapple wouldn’t have been appropriate for the new hive and that the swarm would have moved on within a couple of hours to a couple of days (“maybe into your attic,” he said and smiled.). Joe Hurley said honey bees were least aggressive when on the move. “Honey bees are usually only aggressive when protecting honey,” he said. The bees’ original hive was overpopulated. The queen had laid eggs in her former hive and taken off with half the hive’s bees to build a new home hive.

Joe Hurley climbed a ladder and smoked the bees into a sleepy state, then gently hand-sawed the branch. It proved, however, difficult to sever the limb. He said, “I’m going to shake them into the bin.” That didn’t sound good. I back-walked fast and far down the hill of my front yard, realizing I’d now placed myself much farther from the safety of my house. But, since I was still within my zoom lens’ range I stayed outside. Joe shook the branch with the swarm and most fell into the bin. A good number still flew around, separated from the captured swarm. Those still free clustered back on the branch. Joe Hurley stared into the bin.

“What are you looking for?” I asked. “The queen,” Joe Hurley said. “If the queen isn’t in there, I have to get the rest of the bees.” He gazed some more. No queen to be seen. Back up the ladder he climbed, sawing the branch until it severed. He gently shook the bees on the branch into the bin. He watched for several minutes more and shook his head. Still no queen to be seen.

“If the bees cluster again, call me,” he said. A few hours later, the bees still swarmed the branch.

“The queen could be there, or the bees could just be on the branch because the queen’s stench is on it,” he said over the phone. But he returned and captured the remaining honey bees. This time he was sure he’d captured them all. By dark, only twenty-five or so bees swarmed the branch that now lay in the grass.

A side note: Joe Hurley never got stung and neither did I.

Honeybees numbers are in drastic decline and the reason is a mystery. Remember, a swarm will only alight on a branch for a few hours to a few days. You may want to just leave the bees to find their new home in the wild. But, if you want a swarm removed contact: Andy 07787758033 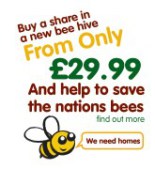