Citizen science – from studying bees or seaweed to solar storm-watching

The range of projects that you and your family can get involved with is staggering, and the potential rewards are immense. 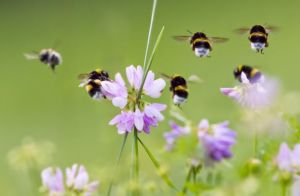 “Bumblebees are my second favourite insect,” says Connor Abrams, aged 7. He prefers spiders – though in fact he’s a fan of all creepy-crawlies. He was delighted when his school took part in the Big Bumblebee Discovery project earlier this year. In the end, the whole family spent the summer roaming around their home county of Yorkshire, searching for bumblebees.

“We went all over the place, to all the parks, everywhere,” says Connor. The project, set up by EDF Energy in conjunction with the British Science Association, asked participants to record bumblebee sightings on lavender plants to gather detailed data about their behaviour.

The whole family became obsessed. “I’d be looking everywhere I went,” says Connor’s mum Carol Ann. “Even Connor’s grandma was at it.”

About 30,000 people took part in the project, and as a result of their work it was reported that bumblebees are thriving in areas of floral density in urban centres; information which, it is hoped, will encourage planners to include more planting in towns.